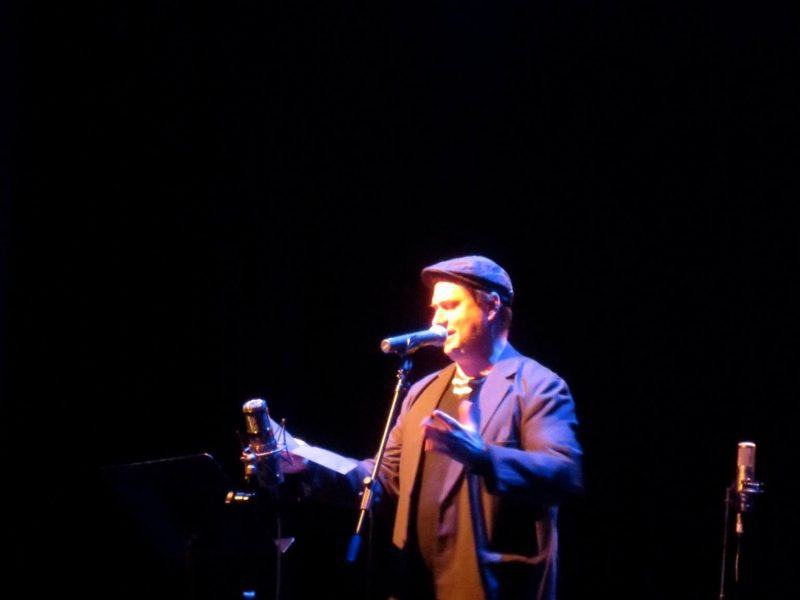 Flesher was clearly excited to get going in his new role.

“My mission is to create more opportunities for more people to experience more poetry,” he said. “Old and young, folks all sorts, in all the nooks and crannies of our valley. I will stir the pot and stoke the fire, bang the tune and strum the lyre.

“I will be available to write and perform poems for special occasions, perhaps your next funeral or court case could be tweaked with a fresh Limerick.

“I look forward to serving the Valley in a new and tasty way. With fresh and zesty verse and rhymes served in a lush bouquet.”

Flesher impressed the poet laureate judges with more than the words he has written.

“Words don’t just come out of his mouth, but spring from every part of his body.  He puts himself out there and connects with his listeners,” she said. “He doesn’t just connect with listeners; he pulls them right in close.”

For Eric ‘tHe RaD’ Ettinger, a rapper with Butterfinger Bombsquad, judging on the panel “has once again revealed the Comox Valley to me to be place of vast and diverse talents, as well as a community eager to dissolve boundaries.”

“The jury members were very thoughtful, insightful, open-minded and collaborative in their discussions as they came to a consensus agreement,” said Arts Council Jamie Bowman. “All the entrants, but especially the finalists, showed real courage, creativity and community showed through this process.”

Flesher will have a two-year term as Poet Laureate.

So who is Kevin Flesher?

His inaugural poem, which he shared when he opened for Shane Koyczan:

What an honour, what a treat, with just a schnick of pain.
Opening for Shane, yes I have done it before,
But ‘twas not from high upon a thrust, I was sitting there on the floor.
I listened in bourgeois confort, the syllables and verse.
The emphatic declarations! The hushed pauses, the oubursts.
He dwelled on childhood’s idylls, to which I could relate. I relaxed and then let down my guard, by then it was too late!
This tiny heart, clenched in this chest, began to sniff around, like and old Tom cat with a missing ear, who’d scraped out of the pound.
Empty as a paper bag, my grandma filled with awesome-
Karate chops of empathy be-stirred a latent blossom
Then, oh then my dear good friends, thru Shane’s artistic power
That tiny bud did thus unfurl into a glorious flower
Those shameless open flowers bravely boast their virile might
And many other open hearts were mingling here that night
I felt amongst the others here a solidarity in pain,
For we, like buds before spring’s sun, had opened up for Shane.
And you tonight, may sit there tight and vow, ‘Oh no, not me, I won’t succumb to something so dumb as Koyczan’s poetry’
But rest assured, once you’ve heard, you’ll never be the same.
For you and me will all agree, we’ve opened up for Shane!

Kevin holds a Bachelor of Education from University of Alberta, and a Theatre Arts Diploma from Grant MacEwan College.

The 2015-2017 Comox Valley Poet Laureate Program was supported by: