Raised in an Ontario swamp, Natalie Nickerson feels fortunate she wasn’t consumed by a swarm of mosquitoes before she was big enough to fend them off herself.

Natalie Nickerson was chosen Laureate on March 10, 2017 following a search organized by Comox Valley Arts, your regional arts council. She will serve a two-year term, until March 2019. 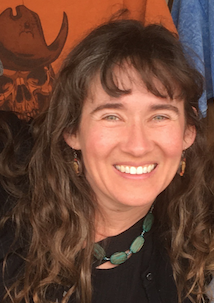 She has great respect for amphibians since those creatures worked hard to keep her alive in those early springs by eating as many of those blood-suckers as they could. Now, in her forties with those near-death experiences far behind her, Natalie finds her inner landscape reflective of the one she grew up in: beeswax calm, tigerlily quiet, free as a blue sky and wild as a thunderclap. Raising her daughter on blackberries and wonder in the Comox Valley has been the cherished focus of Natalie’s adult life. She relishes the beauty around her and writes about it often.

Having recently graduated from Vancouver Island University with a teaching degree, Natalie is now excited to further artistically explore the concepts that she found most inspiring during her education: ambiguity, for instance; what benefits can we glean from cultivating a tolerance for ambiguity?  She feels that in exploring inquiries of this nature she will discover fruits capable of enriching anyone who encounters their expression in whatever form that may take, be it a poem, a sculpture or a carefully prepared meal. She looks forward to her role as Poet Laureate and the platform it offers for engaging the public in deep inquiry and poetic expression. She believes that everyone is a poet since poems are the expression of the vital force that courses through us all. Call it soul, call it spirit, call it what you will, though the quiet and cracked voice may not have spoken since childhood, it is never too late to speak, to be heard.

An Investigation into the Importance of Art for Humanity

“Epiphany interrupts the everyday flow of time and enters as one privileged moment when we intuitively grasp a deeper, more essential reality hidden in things or persons.” Czeslaw Milosz

Our civilization is built on the arts,

our civilization would wilt without art;

if art is what’s keeping the poles apart,

the planet would lose its tilt without art;

But like a patchwork quilt, it could be rebuilt

if we drop all the guilt and free-will with our arts.

Art’s therapeutic, alive to the present;

art’s all-inclusive, that’s why its so pleasant.

Art begets art; regrets dispossessed, pushed out of the nest,

when creation is playing, spirit is guest,

and you are the servant when art has a quest.

and the flowers that bloom on the canvas O’Keefe.

Art is the Gerkin, the Sphinx, Eiffel tower,

the Kabba in Mecca, the Lotus Temple Flower;

the Sagrada Familia, the bulbous Pedrara,

Gaudi ‘s an oasis in the hot, dry, Sahara.

The Dome of the Rock and the Space Needle

St. Paul’s and St. Basil’s, heck all the cathedrals,

It’s Vaudeville and Colville and Melville, the Tate,

the Met and the MoMA, the Empire State.

The Louvre and the Santa Maria delle Grazie,

There’s the patrons of arts

who opened their hearts and their pocket books freely:

the Guggenheims, Sforza and the Medici,

Ruel and Lord Chesterfield, the Royals and councils,

You could say art ‘s the pill to make it all better,

the sun spilling out in the midst of grey weather;

It’s the fabric of wonder, the weave of a-ha!

the warp and the weft of divinity’s law.

every sundance, kachina and totem has purpose.

Even clothes that we wear, if we care about fashion

reveal our reverence for art, and our passion.

It’s why Nureyev danced in the Royal Ballet,

and the meaning behind Mount Helicon.

Moulin Rouge, hats off to you, Toulouse,

and a feather in your cap, Velasquez!

The cathedrals, the castles, the temples and towers,

The Creation of Adam, the Birth of Venus,

the polished perfection of David is genius.

The mystery, the meaningful look in their eyes,

Vermeer and DaVinci’s ladies are prized.

Art is Frida and Leda, the dome at St. Peter’s,

There’s The Scream and The Thinker, Last Supper, The Kiss,

Guernica studies the horrors of war,

Milarepa’s an example of what art is good for.

are more than one thousand, five hundred years old.

Not old, says the Woman of Willendorf’s stone,

try tens of thousands of years ago!

The poets all know it, it’s the origin of being

the bang of creation, imagination, and seeing.

It’s the good and the true, imperfectly pure,

Like when Warhol came on the scene with his cans

to challenge a notion hand-cuffing our hands.

And Pina who did the same work with her dance,

What are the sounds that infuse all the air,

but the music of artful composers and players:

Coltrane on Blue Train and Davis on Trumpet,

along with James Brown reached the soul-music summit,

Blondie, Sabbath and the Styx;

Franklin, MJ, and the Clash;

There’s too many to name all my homegirls and homies.

Mary, Mary why ya buggin’, Rachmaninoff, he ain’t clubbin’

free our minds from mediocrity

loosen the noose on honesty,

engage the gift of novelty,

art is fire, it inspires:

As you can see, this list has no boundary,

no periphery, cause art’s infused eternity.

Forgive my dogged attempt at evidence

an interruption, a serendipity,

a grasp of deeper, sweeter symmetry,

in art you find a hidden glimpse,

an instance of epiphany.