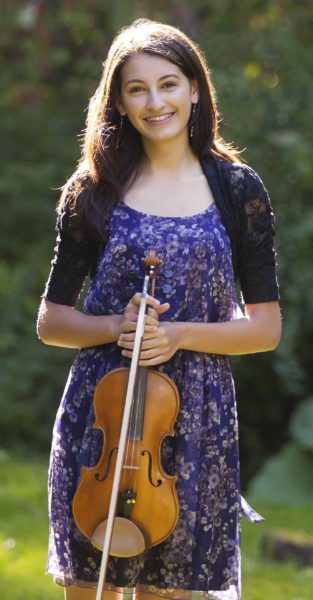 Gardeners Green Folk Club in Merville is thrilled to welcome back our very favourite performer Jocelyn Pettit for a Summertime house concert at 7 pm on Sunday August 18th.

This time she’ll be sharing the stage with Ellen Gira on cello.  Seating is limited, and tickets must be purchased in advance, either by e-transfer or pick-up. Tickets are $20 and include fingerfoods and drinks.  For more information please ring 250-337-5337.

From the West Coast of Canada, Jocelyn Pettit is an award-winning fiddle player, stepdancer, and singer.  With grace and passion, she has performed across Canada, and toured in the USA, the UK, and Europe.  She has been featured on Canadian national television and radio, and shared the stage with The Battlefield Band (Scotland), The Chieftains (Ireland), and Carlos Núñez (Spain).  Jocelyn has released two albums, both nominated for multiple awards, including"World Artist of the Year" at the 2017 Western Canadian Music Awards, and at the 2016 Canadian Folk Music Awards.  Currently, she is pursuing a Master of Music degree (Scottish Music), at the Royal Conservatoire of Scotland.

From the East Coast of the USA, Ellen Gira is a seasoned cellist who has performed throughout the USA and the UK.  Highlights include: The John F. Kennedy Center for the Performing Arts in Washington, DC, and Cadogan Hall in London, England.  She has performed and recorded with Scots singer Iona Fyfe, Irish fiddler Manus McGuire, and US National Scottish Fiddle Champion Seán Heely, among other prominent traditional musicians.  She earned her Bachelor's degree in Cello Performance from the Cleveland Institute of Music, and is completing a Master of Music degree (Scottish Music), at the Royal Conservatoire of Scotland.

Currently based in Glasgow, Jocelyn and Ellen are excited to fuse their influences to create a dynamic and textured sound.  Together they present a lively and soulful performance of Celtic, North American, and Nordic music, with Canadian stepdancing.  They have performed together at prominent festivals and events in the UK, including:  for HRH The Prince of Wales, Prince Charles;  at Celtic Connections Festival, Northern Streams Festival, Niel Gow Festival, Blair Castle, and a live broadcast on BBC Radio.

Jocelyn is happy to be home in BC for the summer, to welcome Ellen to the West Coast, and to come back to the beautiful Gardeners Green Folk Club!  Come join them for a special intimate house concert!